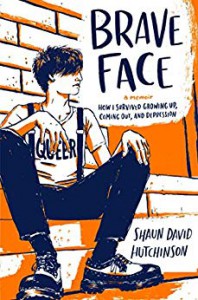 Brave Face is a frank, honest and often times difficult to read memoir about not only the struggles of coming out during the 90's amidst such policies as Don't Ask Don't tell and the defense of marriage act , but is  also a young man struggling with depression. I have not read any of his fiction books but since they have been on my too be read pile for quite some time , thought it was only fitting to read something written about and by that author since I do plan to read his books in the future.  As stated before, this memoir is blunt, honest and very difficult to read at times. He does not shy away from difficult subject matter such as self hate and self harm, all of which the author has trigger warnings at the start of the book and later on as well. Will admit that the ending feels like way too much is crammed. I get that the bulk of the book is about him coming out and deal with depression as a teen but would have liked if some of his adult years of being out and proud but still suffering from depression was not all jammed packed at the end.